I think I like muesli too much, to the point where it could become a problem.  I first had it quite a few years ago out of a box from Price Chopper, and because it can be pricey I have only gotten it on random occasions, despite the fact that I could probably eat it for all three meals.  Within the last few months, I bought Bob’s Red Mill Muesli – about $4 for an 18 oz bag.  It’s amaazing with almond milk! 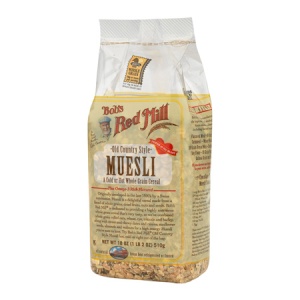 On my first week going raw, I realized I had a bunch of nuts, berries, seeds, and oats that could combine to make my own muesli – yum yum.  So why not make my own? At first, I just mixed enough for my breakfast that morning, but then I decided to make a bigger batch of it.  As always, I just dump a little bit of each into the bowl, mix it around with my hands, eat some also with my hands, and then store for later!  Easy, cheap, and can be made a variety of ways – also a great afternoon snack.

In the future, I’d also like to try making it with some chopped almonds or walnuts, and experimenting with different grains. I’ll have to start looking into that.

I made a big batch last night to have for the week, and to take on a camping trip with me next week!  But who knows if it will last until then…

i am nicole, a 22 year old mostly vegan, always vegetarian who loves raw foods, but is a too poor college student to eat them always. read about my experiments, trials, errors and some successes at being the healthiest, happiest, fullest version of myself.